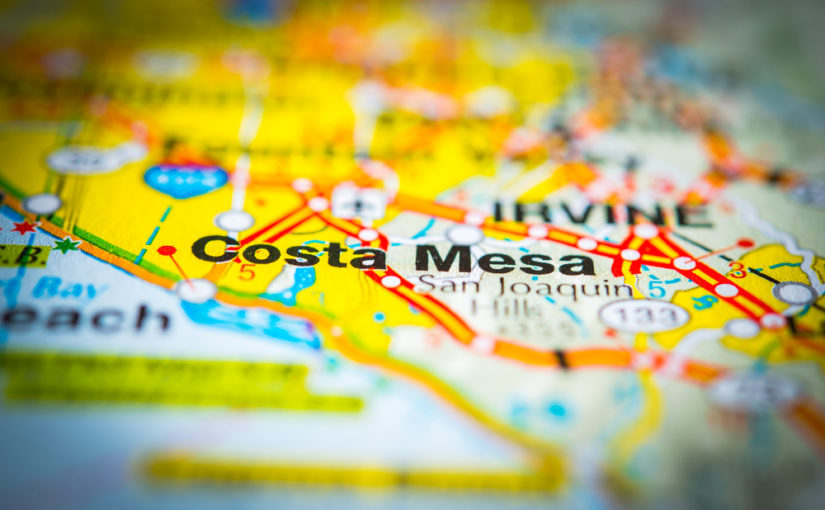 Costa Mesa is nestled in a perfect Southern California spot. It is just 37 miles southeast of Los Angeles and 88 miles north of San Diego. The town of Costa Mesa is 16 square miles, with its border to the south only a mile from the Pacific Ocean.

Let’s Start at the Very Beginning

The first inhabitants of what we now know as Costa Mesa were native American Indians who settled near the banks of the Santa Ana River. Archaeologists have found artifacts in the area that indicate they called their village Lukup. In 1776, six Spanish leagues founded Mission San Juan Capistrano, the area’s first European settlement. Occasionally, the padres at the mission would visit the nearby village of Lukup.

In the early 1820’s, Capistrano cattle grazed in the Costa Mesa area, and housing had to be constructed to protect the herdsmen, who protected the cattle. A small adobe was built to house the crew. This structure still stands, being recently restored and transformed by the City into a museum. You can see it at 1900 Adams Avenue in Estancia Park. Just down the road, at Adams and Harbor is another part of Costa Mesa’s history. Around 1810, Santiago Del Santa Ana made a land grant to Jose Antonio Yorba. Eventually, settlers began buying pieces of the rancho from Yorba’s heirs (around the 1880’s) and established the town of Fairview. They built a schoolhouse and a church there, and a small hotel would be built near the hot sulfur springs nearby. But just a few years later, in 1889, a storm devastated the community, and it reverted to mostly a farming area.

A nearby rancher by the name of Harper had established a little town named after him, on the siding of the Santa Ana and Newport Railroad. The first business there was Ozmen’s General Store, and the post office would be built shortly thereafter, in 1909. By 1920, Harper had decided to change the name of his town to Costa Mesa, which means ‘coastal tableland’ in Spanish. It was mostly an agrarian community and its farmers grew corn, tomatoes, apples, strawberries and sweet potatoes. Oil drilling industries began to flourish and call Costa Mesa home, but the Great Depression wiped out much of the industry in the area: even the local bank closed. Then, a couple of years later in 1933, a huge earthquake shook the town and damaged many businesses and the main school. The school was rebuilt and is now used for school administration and operations. Costa Mesa just exploded in population following World War II, as soldiers who had trained at bases here wanted to move back with their families and establish deep roots.

Costa Mesa has always rebounded, and today is a major commercial and industrial center of Orange County. It has a population of about 115,000 people. In Costa Mesa, we are proud of the arts, and our city adopted the slogan “The City of the Arts” and is home to the Pacific Symphony and the South Coast Repertory Theater. The Segerstrom Center for the Arts seats 3000 people, being completed in 1985. In 2006, both the Renee and Henry Segerstrom Concert Hall (seating for 2000) and the Samueli Theater (seating for 500) opened their doors to lovers of the arts. Costa Mesa also has 26 parks, the same number of schools and 2 libraries. As you can tell, we love Costa Mesa, and would love to count you as one of our new neighbors! Call us and let us know how we can assist your move here at Stavros Group!