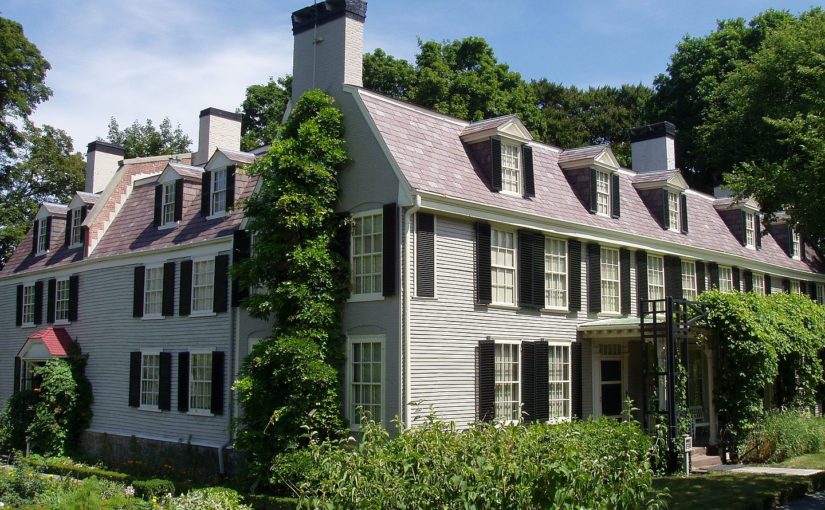 With the July 4th holiday marking America’s 244th birthday this week, we thought it’d be interesting to take a look back at some of the beautiful old homes once lived in by some of our founding fathers. It’s fascinating to see how real estate trends have changed over the years, however certain influences have also remained steady. Many of these historic homes have been preserved over the years and are even open to the public.

Whether you’re traveling outside of Orange County, planning to watch fireworks in Newport Beach, or spending some quality time on the shores of Laguna Beach with friends and family, we hope you have a happy and safe 4th of July!

Peacefield, also called Old House, is a historic home in Quincy, Massachusetts that served as the former residence of U. S. President John Adams and his family for four generations. It is now part of the Adams National Historical Park.  The oldest portion of the house was built in 1731 by Leonard Vassall, a sugar-planter from Jamaica, and acquired by John and Abigail Adams in 1787 after its loyalist owners had abandoned Massachusetts during the Revolutionary War. The house was given by the Adams family to the United States in 1946, and is now open to the public as part of the Adams National Historical Park operated by the National Park Service. Lincoln Home National Historic Site is the historic-site house that Abraham Lincoln lived in with his wife, Mary Todd, from 1844 through 1861, before moving to Washington, DC to serve as the 16th President of the United States. This historic house, located in Springfield, IL, was the only home that Lincoln ever owned. While it was first built in 1839, Lincoln purchased the 12-room Greek revival, located 200 miles south of Chicago, in 1844; it was later restored in 1860. In 1887, Lincoln’s son, Robert Todd Lincoln donated the family home to the State of Illinois under the condition that it would forever be well maintained and open to the public at no charge. Today, the home has been completely restored to look like it would have in 1860. Westland Mansion was the home of Grover Cleveland, the 22nd and 24th President of the United States, from his retirement in 1897 until his death in 1908. The house is located in the historic district of Princeton, New Jersey, and is a National Historic Landmark also known as the Grover Cleveland Home. The house, built by Robert F. Stockton in 1856, was patterned after a nearby 18th-century mansion and was described as being a 6,345 sq. ft., 2-½ story, stone structure covered with yellow-painted stucco, twin parlors on the first floor, spacious rooms, high ceilings, and handsome marble mantelpieces. Cleveland named it “Westland” in honor of his friend Andrew Fleming West, a humanities professor at Princeton University who assisted Cleveland in securing the purchase of the home. During Cleveland’s time there he made several changes, including updating the building’s façade in the Italianate style popular at the time. In 2015, it was sold for $4,325,000. It is not currently open to the public. The Springwood Estate in Hyde Park, NY was the birthplace, lifelong home and burial place of the 32nd President of the United States, Franklin D. Roosevelt. The estate was purchased by FDR’s father, James Roosevelt, in 1866 for $40,000, at a time when a textile worker’s earnings were less than a dollar a day. The estate remained the center of Roosevelt’s life through all stages of his career. In 1915, much of the home was remodeled and the exterior was altered to look like a mansion in the Colonial Revival Style. In 1943, Roosevelt donated the estate to the American people under the condition that his family maintained a lifetime right to usage of the property. Today, the Home of Franklin D. Roosevelt National Historic Site, which was established in 1945, preserves the Springwood estate. Wheatland, or the James Buchanan House, is a brick, Federal style house outside of Lancaster, Pennsylvania, that served as the home of the 15th President of the United States, James Buchanan, for two decades. The house was constructed in 1828 by William Jenkins, a local lawyer, and later purchased by Buchanan in 1848. Wheatland is a Federal style that includes design elements, such as lunette windows, that show the influence of various architectural styles that were prevalent in the early 19th century. Wheatland was designated a National Historic Landmark in 1961 and was added to the National Register of Historic Places in 1966.  Today it is open to the public for tours and is filled with original furnishings and personal artifacts to help tell the story of Buchanan.